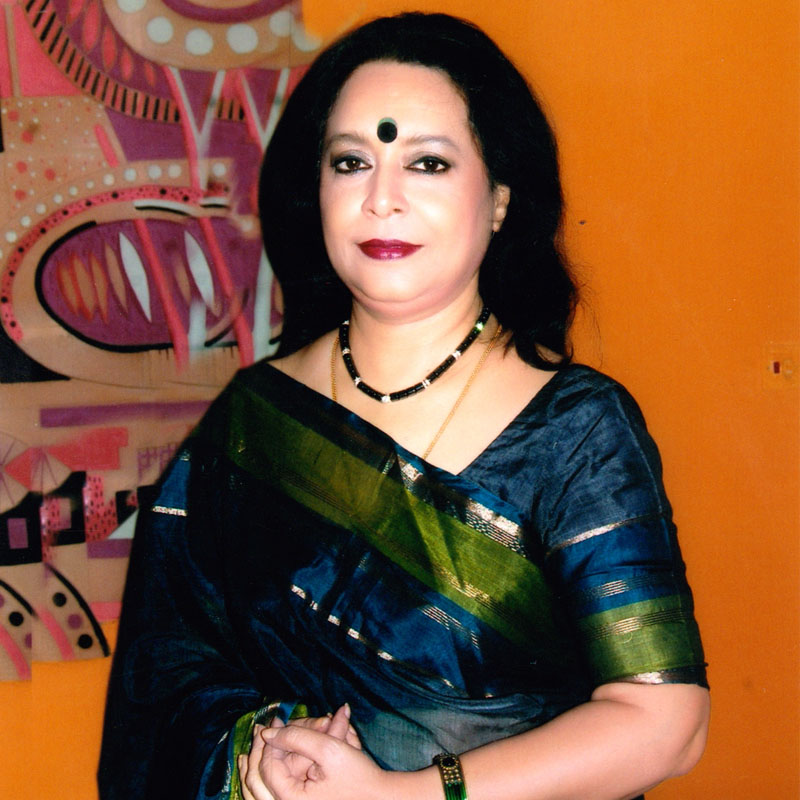 The name of Lily Islam is now very much familiar to all as an artist of Tagore’s song. Her paternal home is in Barisal, Bangladesh. She has grown up in a healthy cultural atmosphere at Kolkata. She has started learning songs from her beloved mother. After that she got admitted in GITABITAN the first music organization in Kolkata. Beside this music organization she was taking lesson from respectable eminent Tagore’s song artist Ashoktoru Banerjee. Afterwards she went to Santiniketan for taking education on music. The natural beautiful dreamy atmosphere has taken her to different world and she has discovered her newly. She came across different renowned teacher and was taking lesson on songs, dance acting and hand work. Though being a student of Sangeet bhaban she was very intimate with the student of other bhaban. Long 11 years memory of Santiniketan is most sweetest memory to Lily.

She is beloved student of great Legendary Artist Kanika Banerjee, Nilima Sen, Gora Sarbadhikari and Ashes Banerjee. She took lesson on dance from Kalamandolam Shankar Narayan and Jiten Sing. Lily practiced acting by the guidance of Paritosh Banerjee. The prominent theater personality Kumer Roy has taught her theater while Mr. Roy was in Santiniketan. Lily used to learn after learning whenever she got scope to reach the experts. She was a talk of Santiniketan that she always shown her interest to come in front of all function. She has successfully achieved the degree in M MUS on Tagore song. She is recipient of DABROTO BISWAS Memory Award.

Her first audio album titled “Annandodhoni” was released in the year of 1990. After that she doesn’t have to look back, one after one her audio album was released from Bangladesh and Kolkata namely HARYE JAOA MONTI AMAR, VALOBASHI VALOBASHI, Je GAAN BAJE, BIRAHA MODHURO HOLO, JIBONER DHRUBOTARA, SHURER AGUN and many more. Duet audio album with Sadi Mohammad and Australian resident Chanchal Khan titled BADHECHHI AMAR PRAN and PROTHOM KADOM PHUL respectively. Her another duet album was released with young artist Himadri Shekhar titled AJANAR SHANDHANE. Indian renowned company HMV SAREGAMA has released her solo audio album BONER HOREEN. One music video was released from Kolkata titled CHITTO PIPASHITORE. Lily has edited a book name SHURER AGUN based on 50 popular Tagore Songs Summary and notation from SONGBORTO Publication. She wrote a book named Balaka based on Tagore's Balaka poem book. She also writes many Articles which is Published in Newspapers, Magazine etc.  Lily Islam is enlisted artist in special grade in Bangladesh Television and radio. Secretary of JATIYA RABINDRA SANGEET SAMMILAN PARISHAD, member of BANGLADESH RABINDRA SANGEET SHILPI SANGSTHA. She is a director of her own created organization UTTARAYAN and going to start a full formed Music Academy. Main motive is to provide training of Rabindra Sangeet all over Bangladesh. She has taken up such a project as she thinks, it is a moral obligation to her. She has traveled in different place of Bangladesh and India, Australia, America, Canada, London, Qatar, Dubai, Singapore and took part in different event with high appreciation for her performance.

Lily Islam is presently working as Associate Professor in Renowned Design University Shanto-Mariam University of Creative Technology and  Director Public Relation in Shanto-Mariam Foundation. She has been honored by the only music award CITYCELL CHANNEL I MUSIC AWARD in the category of popular choice in Tagore song as Best Artist.